For Bigger is Bettor it is getting Better all the time 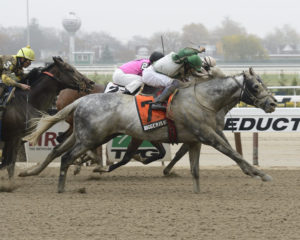 Bigger is Bettor about to win his last career
race — the Slew o’Gold at Aqueduct on November 17, 2013. He won by a
nose. Photo Credit: Adam Coglianese/NYRA Photos

When a Thoroughbred makes his racing debut at Saratoga Race Course, you can be certain that its connections have high expectations. Winning a race at the Spa guarantees that dreams of the Kentucky Derby will be regular nighttime visitors until the following Spring.

Seven years ago, owners Chester and Mary Broman debuted one of their homebreds on the turf. His name was Bigger Is Bettor, and on his back for this maiden voyage was Saratoga’s top jockey, John Velazquez. Unfortunately, Bigger Is Bettor was beaten by nearly 35 lengths that day.

In the summer of 2011, Bigger Is Bettor returned to Saratoga and won the Albany Stakes. In 2013 he won the Evan Shipman at Saratoga and ran second in Belmont Park’s Empire Classic and ended his career on November 17 with a neck victory in Aqueduct’s Slew O’Gold.  Bigger Is Bettor didn’t turn out to be a Classic horse, just a classy one. He finished with a record of 5-9-6 from 30 starts and earned more than $440,000. He also finished with a bowed tendon.

With his career ending injury, Bigger Is Bettor was no longer a racehorse and still young. For many ex-racehorses, this could have been big trouble. Not all racehorses end up on nice farms where they can hang with other horses or help create new ones. There are plenty of horrific tales of healthy, young horses subjected to abuse, neglect and even slaughter after they leave the track.

Fortunately for Bigger Is Bettor, his future was in the hands of Chester Broman.  “He was a terrific racehorse,” said Chester Broman, who is a strong supporter of the Thoroughbred Retirement Foundation and of decent treatment for retired racehorses. Bigger Is Bettor remained at Broman’s Chestertown Farm in upstate New York, until it was decided that the best place for him would be the Thoroughbred Retirement Foundations farm in Montpelier, Va. “I believe in taking care of these retired horses; we plan to start doing that at my own farm soon. Bigger Is Bettor was hurt and couldn’t race any longer. But I knew he could make a nice riding horse for someone.” 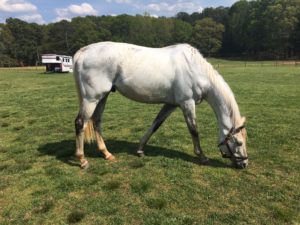 Located on the lovely rolling hills of James and Dolly Madison Estate, the TRF farm has been in operation at Montpelier since 2003. Farm Manager, Kim Wilkins and her team of dedicated volunteers specialize in retraining off the track thoroughbreds and have had great success in doing so. Bigger Is Bettor arrived at TRF’s Montpelier farm in October 2016.  “I treat all the horses that come in here the same way: as if they are completely green,” said Kim Wilkins, farm manager at Montpelier. “We always give them seven to 10 days in quarantine, in case they pick up anything on the way here. Then, our veterinarian checks them out. We also rely on information from the previous owner. Sometimes we get a little bit of information, sometimes, we get a lot. (The Bromans) gave us a lot of information about Bigger Is Bettor.”

True to her word, Wilkins began the re-training of Bigger Is Bettor “starting from zero.”

“Training a regular riding horse is a lot different than training a racehorse,” Wilkins said. “For one thing, jockeys have their stirrups high up. So, Thoroughbreds have no idea what `leg’ is. They are almost insulted when you poke them in the ribs and say, `C’mon, let’s get moving!!

“At first, I was worried about Bigger Is Bettor because he is a grandson of Storm Cat, and Storm Cats have are reputation for being difficult. I have another Storm Cat grandson, and he’s grumpy and tough to deal with. But Bigger Is Bettor is an awesome horse. He was very cooperative from the start and he learned quickly. Plus, he is very good-looking.”

It was his handsome appearance that first captured the attention of 19-year-old Rue Carmen, an engineering student and member of the Equestrian Team at the University of West Georgia in Carrollton. “I was on the internet looking for a horse,” Carmen said. “I was looking for a project horse, one I could work with and develop. As a college student, my price range wasn’t very big. Naturally, we first looked for horses in Georgia. I didn’t think I would have to go up to Virginia. But I found the TRF, and `Big’ was the first horse I looked at.”

“We drove 12 hours up to Montpelier and I looked at a few horses and including a horse called Top of the Pyramid. He was probably the smarter choice because he was more experienced, but we just didn’t have a connection. Something clicked with me and `Big.’”

Wilkins agreed with the decision. “Top of the Pyramid has a big, bouncy trot,” Wilkins said. “Rue wanted a horse for equitation, and you don’t want a horse a horse with a big, bouncy trot for equitation. Rue had driven all that way from Georgia and when she tried Bigger Is Bettor and saw how smoothly he moved, she knew she found her horse.”

Carmen adopted Bigger Is Bettor in January of 2017. They have accomplished a lot in less than six months.

Carmen gave `Big’ a few weeks to get used to his new surroundings. Although `Big’ had been cleared by the veterinarian and successfully handled Wilkins’ training, Carmen felt that patience was the prudent way to deal with his injured leg. 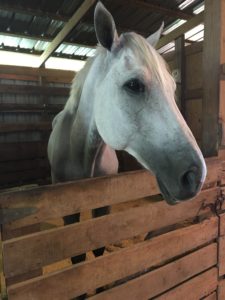 “`Big’ has only been here a few months, and we had to work through a few abscesses and an ulcer, but we have had a lot of fun with him,” she said. “He has a friendly, big personality, but he also has a great work ethic. He is really calm. He was recently gelded, and most people couldn’t believe that he wasn’t already gelded. When I got him, he had never cantered, only walked/trot. By the end of February, he cantered, walked/trot and did cross rails.”

During the summer, Carmen lives with her parents in Union, Ga. `Big’ is stabled about an hour away at the UWG campus. Still, Carmen makes regular visits and has plans for `Big.’.

“Because of his leg, I’m not going too fast with him.” she said, “We don’t show our own horses at  school; everything is a `catch’ ride, so he won’t compete in any college shows. But my goal with him is to eventually enter him in (United States Equestrian Federation) rated shows.

“He is doing well, He adjusted to sharing the paddock with 20 other geldings and he loves to go to work. He is very cuddly, almost in your face, and the trainers and everyone here just loves him.”

For `Big,’ it’s getting better all the time