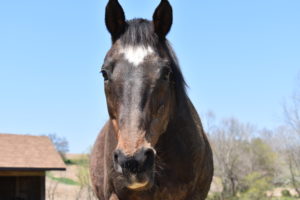 “As the old saying goes, “You can lead a horse to water, but you can’t make him drink.” Little did I know that I was about to challenge that belief on a dreary Sunday evening in December at Second Chances Farm in Sykesville, MD- my sanctuary and second home that reunited me with a lost love of horses.  You see, I am an inmate at Central Maryland Correctional Facility and this farm gives me a second chance to find myself.

It was raining and supposed to get extremely cold that night, so the farm manager, Sarah Stein, asked us to put blankets on the horses after we feed them.  I walked out to the fence with the feed, blankets, and halters where Poppa and my old buddy Dancer waited for me. Dancer was my first horse when I arrived at the farm four months ago and we formed a special bond.

As I watched Poppa and Dancer eat, Dancer began to have bouts of coughing- he would cough three times and then go back to eating. He ended up coughing about nine times, and after the last spasm, instead of returning to eating, he walked off to do his normal cribbing on the fence. So I saved the rest of his food, and took the blankets, halters, and Poppa to the run-in shed.

Poppa munched on hay while I got him all buckled up in his blanket. As I finished with Poppa, Dancer walked in to check things out, and I put his halter on. I walked him over to the hay and began to wrap him up in his blanket. As I was buckling him up, I realized that he wasn’t eating any hay. So when I finished, I walked up to his head to ask what was wrong. Dancer was being extra affectionate, more than his usual stubborn self, and I heard him making a dry swallowing sound. I stayed there listening to him, talking to him and petting him for a few minutes.

I decided I wanted a second opinion before I freaked out and thought every horseman’s worst fear, colic! So I asked my co-worker Tyler Murray to come and listen to Dancer with me. He grabbed a stethoscope from the barn, and we went to listen. When we first came back into the run-in shed, he wasn’t making the noise anymore. So Tyler started listening to his gut. Then Dancer started making the noise again, so we listened to his throat, and we both agreed there was something in his throat.

I questioned Tyler, “Why wouldn’t he just go drink some water?” Tyler replied, “It’s because Poppa isn’t drinking.” I had seen Dancer go off and drink by himself when he was thirsty. I took Dancer to the trough while Tyler called Cissy, an emergency contact number for the farm, to see if we needed to do anything for Dancer’s condition. When Dancer and I got to the trough, he just stood there. I put his head down by the water, and he still just stood there, and looked at me like, “What are you doing?”

So then I just reacted, and I drank the water out of the trough. And then he drank, and I drank again. We repeated this process a few times before he drank by himself. Then Poppa came strolling up and they drank together. After that, he was back to his normal Dancer self, eating and cribbing. I gave him the rest of his feed as Tyler and I breathed a sigh of relief. We both patted Dancer and thanked him for the scare as we laughed off the stress and called it a day.

Later when recalling the event, I remembered about a Native American Horsemanship book I read called “Horse, Follow Closely”. The book talks about being a herd leader and how the horses drink in the wild. I realized that I had done that, and I became one with the horse that day.”

Learn more about our Second Chances program in Sykesville.