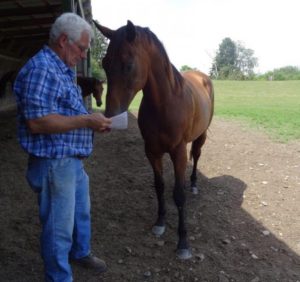 Jim Tremper has been with the Thoroughbred Retirement Foundation’s Second Chances program at Wallkill Correctional Facility for over 30 years. Photo by Jessica Moore

Three decades having passed since he jackhammered concrete floors of an old dairy barn to make room for horses, Jim Tremper now looks back with pride on a little idea that turned a New York prison into a place of hope and second chances.

Tremper, farm manager withThoroughbred Retirement Foundation’s groundbreaking racehorse/prison program Second Chances was there the day a handful of inmates and security guards set about converting a 6,000 square foot barn into a shelter for unwanted retired racehorses and an old hayloft into a classroom to teach inmates horsemanship skills.

And from his vantage as barn manager at the Wallkill Correctional Facility in upstate New York, Tremper has welcomed about 500 OTTBs, some with knee and ankle fractures and other physical challenges, and has helped to provide them a safe haven when their race days ended. And he has marveled at the way even the most hardened inmates have left their negative attitudes at the barn door, embracing the chance to learn about and care for horses through the foundation’s novel Second Chances program.

In a Q&A with Off-TrackThoroughbreds.com, Tremper recalls the early days when a 130-acre tract of land with an old dairy barn on it became a springboard from which nine other racehorse/prisoner programs were created. And of the rewards of being on board from the beginning, helping horses with few options and inmates with little hope.

Q: How did you first get involved with the TRF?

I was in between jobs when a veterinarian I knew recommended I apply for a vocational instructor’s job at Wallkill. When the people at the prison saw my resume, they told me the TRF was looking to convert a dilapidated dairy farm over for horses and suggested I send my resume. They interviewed me at Belmont Park in early April 1984. And I started working at Wallkill on May 6.

Before this, I’d worked at Standardbred breeding farms while working my way through college, studying biology for a liberal arts degree. 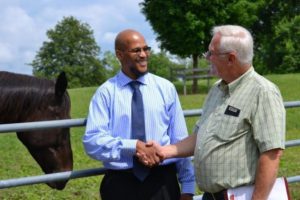 Tremper and TRF graduate Steven Emery enjoy a moment on the farm.

Q: And this was where it all began.

Yes. It all began after Monique Koehler read an article in Newsday about failed attempts to rescue racehorses. Monique read that article and decided on her own to contact Secretariat’s owner Penny Chenery, and other owners of famous horses to see if they could help. (Author’s note: Koehler founded the TRF in 1982, and negotiated a milestone agreement with the State of New York Department of Correctional Services).

Before I was involved, she convinced Belmont Park to host a fundraiser, where three famous geldings —John Henry, Forego and Kelso — were on hand to help raise funds to start the vocational program.

Q: How did they convert a dairy barn for horses?

The big barn, which was approximately 6,000 square feet, was falling apart. And the ceiling was not high enough for horses. So we jackhammered the first floor down to gain more height, and put in clay floors because they’re easier on the horses’ legs. The stations where the cows stood and ate were rotting, so we jackhammered it all out. We put in walls, and shored it up. The tallest part of the barn was a foot and a half off plumb.

It was a big job. A couple of officers and I taught a few inmates how to do what we needed. One inmate had machinery skills, so he was incredibly helpful by helping us use an old bulldozer. Another inmate had been a carpenter’s assistant for less than a year, so he helped a lot. But otherwise, it was put together by guys who had no prior construction skills.

Q: Three months after you came on board, the first horses arrived.

The first horse was Promised Road. He arrived in August 1984. And three days behind him was Rita’s Deal, a claiming Horse of the Year of New Jersey. And a bunch of horses followed after that.

Q: Who was your favorite and why?

Three Fires. He was the best behavior modifier we had. He took the toughest inmates with no socialization skills and converted them. The horse did not tolerate aggression.

Q: Why do horses work so well with inmates?

Horses read body language as well as any other, and they have the memory of elephants. An inmate has to learn to change the way he presents himself to the horse, they need to be more agreeable. And once this happens, things start to change for the better in an inmate’s mind.

I’ve seen it happen so many times. One of my favorites was a guy nicknamed Solo. He wanted nothing to do with anybody. When he first started working with the horses, they’d either try to bite him or run away. I wouldn’t say he had a full 180-degree turnaround, but after he started working with horses he started to open up. He even made some friends. He never had that before. And he wanted nothing to do with anyone until horses turned him around.

I talked yesterday to a guy who’d been a drug addict for years and years, in and out of jail. He’s one who did a 180-degree change. He’s been clean and off drugs and out on parole for a couple years now, he’s doing very well, and he credits the horses for doing this.

But the one I’ll never forget was this tough guy who was always in jail. He couldn’t get along with anybody. Our deputy knew him from Sing Sing, and one day the deputy said to the prisoner, “Charles, I want you to try working with the horses, you really need this.” He didn’t want to do it. But he came out, and he was very negative and confrontational. After a week of having eight horses to take care of, he came up to me and said he needed help. So I paired him with an easygoing inmate. They started doing things together and Charles started learning more and more about he horses; he wanted to do a good job. That prisoner went on to leave Wallkill and he works today as a drug counselor in New York City. 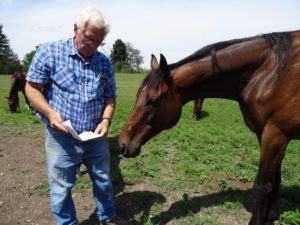 For Tremper, the biggest joy that comes from teaching inmates to take care of ex-racehorses is watching the animals thrive.

For me, the most rewarding thing is what it does for the horses. We have all kinds of problems come in here. We’ve had horses who are foundering, horses with fractured knees and ankles, horses with digestive problems, nervousness, behavioral problems, and some minor aggressions.

Once the horse gets into this environment, they don’t feel pressure. And they mellow right out and enjoy their retirement. When you pressure a horse day after day, they catch an attitude. We don’t have any of that here. Our horses are just awesome. The old saying that the ‘outside of a horse is good for the inside of a man’ is really true in a prison setting. Inmates, most of the time, are used to taking what they want. Drugs, money, they feel they’re entitled to it. That’s the history of almost everyone I get on the farm. They feel they deserve more than they’re getting. But they don’t get away with that attitude with a horse. You really have to ask the horse for what you want. Most of the guys, once they learn to communicate that way with a horse, become far less self-centered and better people.