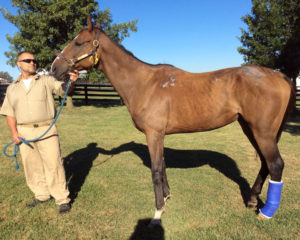 Two months after being rescued from a dire neglect case in Mercer County on a farm leased by trainer Maria Borell and her father, the six horses entrusted to the inmates at the Thoroughbred Retirement Foundation’s Blackburn Correctional Facility are thriving.

While many of them still have months to go in their recovery, each of the six being cared for at the Lexington, Kentucky TRF farm has put on between 100-200 pounds and appear to be happy and in good health.

Z Camelot, the worst of the six when he arrived, has gained around 150 pounds, said David Childers, one of the inmates entrusted with his care.

“He had been shut up in his stall,” said Childers of Z Camelot’s status when he was found at the Mercer County farm. “He was eating the shavings in the stall, and they said he probably got some nutrients out of that, which probably allowed him to survive.”

Linda Dyer, who runs the program at Blackburn–a Thoroughbred Aftercare Alliance facility, as are all the TRF farms–said that Z Camelot probably weighed around 700 pounds when he arrived, far below the 1,100 pounds normal for a horse his size.

Today, he spends 24 hours outdoors to give him ample opportunity to graze and to continue putting on the weight he needs to return to optimal health.

Said Childers, “His day now is just like a normal Thoroughbred on any farm. He stays in the pasture, almost day and night, and eats grass and has plenty of water. Just recently, he started getting a ration of grain. Until recently, you didn’t want to feed them grain until they started getting their health back and their digestive system started getting back.”

Z Camelot was one of eight horses who were deemed the worst of the 43 rescued from the farm associated with Borell and her father, Chuck, who was charged with 43 counts of animal cruelty. He has pled not guilty.

Silver Cliff, 14, was almost in as bad shape as Z Camelot, but it would be difficult to look at him today and determine that he had been starving just two months ago; he has put on close to 200 pounds.

Princess Megan, a 12-year-old broodmare, had what officials believed to be a weanling colt by her side; it turned out that her foal was a yearling who had never been weaned and was so malnourished he appeared to be a large weanling. That colt, by Midshipman, has now been weaned and moved elsewhere.

Meddling, a 12-year-old bay mare, was in the same situation; her then-unweaned yearling has now also been weaned and moved elsewhere. Both mares have put on over 100 pounds, and a shiny coat with dapples starting to appear is testament to Princess Megan’s good condition.

Parhelion (Ger) is a 16-year-old gelding who now appears to be close to normal weight, and Synergistic is a 17-year-old bay mare who was fretful when she arrived, but who is thriving in a paddock of older mares.

Of the entire group, Z Camelot is the one who has had the most attention, both for his severely emaciated state when he arrived, and for the fact that his original owner was Ahmed Zayat, who lost him in the claim box in 2013. He was later claimed and ultimately owned by Maria Borell.

He also still appears the thinnest and the one who has the furthest to go, but the men in the program spoke to how very far he has come.

“He didn’t even have hair on his back when he got here,” said Childers. “He looks like a different horse,” he said, pointing to patches of white medication on his shoulder and hip which is still required on some of the worst spots. “It’s just a matter of time. As you can see, he’s pretty gentle. They were pretty gentle when they got here. They’re all good horses.”

Andrew Niehoff was caring for Silver Cliff on this day. “He’s actually gained weight a lot quicker than these other horses,” said Niehoff. “He’s filled in really well, and has gained at least 200 pounds. He’s a great horse. For the most part, he’s pretty calm. Z Camelot, that’s his buddy. They’re very good together. He loves attention.”

Dyer said that a GoFundMe project had raised $20,000 to feed the horses after the initial publicity about the neglect case. Medicine and veterinary services were donated by Rood and Riddle Equine Hospital, among others, and the Zayats donated fly sheets to protect the horses’ skin.

“We had to keep the fly sheets on the mare and Z because if you touched their skin, it left a raw spot,” said Dyer.

For the first two months, the horses were only grazed, said Dyer, who stressed the need for them to come back slowly. Too much, too soon, and their digestive systems would fail. “We put Z in a field with shorter grass to start because we couldn’t have him gorging himself,” she said. He has since been moved to his own paddock. “The vet was onto the guys about not giving them any treats. She said you’d kill them if you did, and the guys felt so sorry for them.”

Tiffany Ratliff, who took over as warden at Blackburn July 5, just after the arrival of the horses, said that this incident was a microcosm of what was so successful and important about the TRF’s correctional facilities programs, which now exist in 11 states.

“We are providing a service to these animals and to the industry that is much needed and this is a program that helps to rehabilitate the inmates who are here,” she said.

Blackburn is a minimum security facility and the men in the prison are typically in on drug, robbery, forgery and similar charges. No violent offenders work in the Thoroughbred retirement program.

“The program teaches them a skill and it also teaches them compassion and some life skills they wouldn’t gain through a different program or a different type of job,” said Ratliff. “Hopefully, they take some part of what they have learned here along with them when they leave. But I am just amazed at what Linda and the guys have done here.”

Added Childers, “It’s a humanitarian thing to do. If it weren’t for this, some of these horses probably wouldn’t have made it through.”

Michael Caudill, a public information officer for the department of corrections, said that some of the men who end up in places like Blackburn have never had a job their entire lives, and may have been raised by parents who never had a job.

“Their whole lives have been lived on the street,” he said. “So they come here and they learn a skill and they get out and they can take care of themselves and their families. This is a good thing for the community. We want to be a good partner with Fayette County. We’re not just housing a bunch of guys. You put somebody in a little cell for five years, and they’re not better when they came out. They’re worse.”

“These men woke up one day and found they were entrusted to bring these horses back from the brink of starvation,” said Diana Pikulski, the TRF’s Director of External Affairs. “And the whole country was watching. This is life-altering, especially when you were doubting your self-worth before that day. The program at Blackburn is amazing and we need the support of the industry. We need to secure the future of this program for many more years to come.”

Said Niehoff, “It has definitely been very humbling to work with these horses. Just being able to see these horses grow, and to be given some responsibility taking care of them has definitely helped me grow as well. I had been around horses before, but I had never actually been around a starved horse. Seeing something like that is very hard for anyone to see. But they’ve come a long way.”