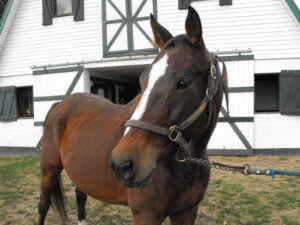 It never ceases to amaze how quickly mistreated horses can make a full comeback with patience, care and a whole lot of love.

This has been true ever since the Thoroughbred Retirement Foundation launched its Second Chances Program at the Wallkill Correctional Facility in New York back in 1984. That program has expanded to nine different states and uses former racehorses to teach inmates a vocation in horse care and management and even greater lessons of trust and mutual respect.

One of the TRF’s more recent Second Chances success stories is at the Blackburn Correctional Facility in Lexington, Ky. There, horses that were part of a now infamous rescue of 43 horses from Mercer County last summer are flourishing. The horses had been abandoned for weeks, with many suffering from severe malnutrition and one afflicted with a serious foot abscess.

“Z Camelot was the worst of the group,” said Linda Dyer, Second Chances Farm Manager at Blackburn. “The veterinarians thought he could die. Personally, I had never seen a horse so starved that he just had skin — what was left of it – and skeleton. There was no muscle left on his body at all.

“Previous connections of the Zayat team found him a good home in Pennsylvania. Everybody had really become attached to him and it was hard to see him go. He had the most hands-on care of all of the horses. He was hand-grazed every day. The (inmates’) dedication to him was amazing. They were appalled that someone could do this to these horses.” 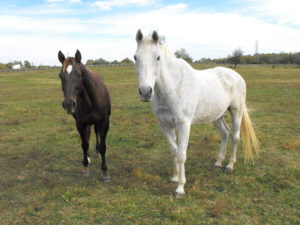 “Silver Cliff will stay with us here at Blackburn,” said TRF Herd Manager Sara Davenport. “He was originally adopted from us and is happy at Blackburn. He easily, made a full recovery and is perfectly healthy now. In fact, he is one of the heaviest horses in the herd.

“Parhelion was one of the first rescues and now he and Silver Cliff are best buds. They seem to be connected at the hip, and it’s a pretty funny picture: big white Silver Cliff and little, red Parhelion, who turns the prettiest liver chestnut color in the summer. Parhelion is a little timid, but he’s a good boy and well mannered – and he is the boss of the two!”

According to Davenport,  two mares that came in with yearlings on them have also recovered well at Blackburn.

“Once the yearlings were weaned, the mares bounced back pretty fast,” Davenport said. “We still have Meddling and she is such a good girl — horrible `cribber’, but a sweetheart. She might even be able to do therapy one day. Princess Megan was returned to a previous contact once she recovered.” 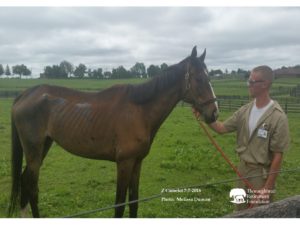 “We sent L C Mystery to the TRF’s Second Chances Program at Vandalia (Illinois) two weeks ago to make more room at Blackburn, and she is doing great,” Davenport said. “Synergistic is still with us and she is 18. She’s had some sort of trauma to her hip, so she’s a little arthritic getting up and down and needs a smaller herd setting. She’s not in any pain. She is very maternal and acts like the mother hen of her group of mares.”

“All of these horses were on Ulcerguard, and we thank all of the people who donated this and other supplies for them,” Dyer said. “We still have some horses that are on it and the veterinarian has told us they will probably have to live on it for the rest of their lives.

“We hope these horses have continued good lives, as they sure do deserve it after having been so badly abused.”

To contribute towards the continuing care of these horses, please donate to the Thoroughbred Retirement Foundation.