As part of its mission, the Thoroughbred Retirement Foundation encourages anyone who has made a living or derived enjoyment from Thoroughbred horses to consider what happens to these animals when they are through racing. Owners, breeders, trainers, jockeys, racetrack administrators, exercise riders, grooms, hotwalkers, veterinarians, blacksmiths, horse transport and farm personnel and, of course, the fans have it in their best interest to make sure these horses have a safe place to land after they leave the racetrack.

Naturally, adoption is the most demanding and, thus, the most rewarding means of providing after care for Thoroughbred racehorses – as long as there is a full understanding of the responsibility it entails.

Shelby Harris understood this completely when she met Reggiville.

Reggiville was seven years old when he raced for the 68th and last time at Hawthorne Park in 2015. Not only did he run last that day, but he suffered a fractured sesamoid to end his career.

Bred in Illinois, the son of Irish stallion Viareggio was sent for surgery. He was donated to The Canter Association and then fostered at Stapleton Farm in Leslie, Michigan. That’s where Harris, a 22-year-old college student from Windsor, Ontario, Canada , found him last April.

“I’m not sure exactly how long his rehabbing process was, but during that time Reggi became very malnourished and angry,” Harris said. “The day I went to see him he was bone thin, his hair wasn’t groomed and he was covered in cuts from being outside. He didn’t have an ounce of muscle anywhere to be seen. They said his weight issue was likely from ulcers that no one ever bothered to clear up. On top of all that, he had incredibly bad scratches, a mild fever and cracking and bleeding on his front-left hoof. His feet still had shoes on, but were incredibly overgrown.”

That still wasn’t the worst of it. Along with Reggiville’s physical problems, his disposition had soured.

“He had some pretty bad behavior issues that went along with his poor appearance,” Harris said. “His rider was apparently not able to be at the barn the day I went there, and the owner of the facility, an experienced dressage rider, would not ride him for me. She told me a lot about him under saddle, which included that he would rear, bolt and he was very hot, especially when he was being ridden outside. She told me he wouldn’t lunge property and I shouldn’t even bother to try without a lunge whip. She said he needed to be sedated for any farrier work because he becomes dangerous. He broke three cross ties in front of me, did not want to lift his back feet and definitely tried to kick out slightly. He bit my shoulder and he would not stand still in the cross ties long enough for me to get a good look or brush him.

“I really didn’t want a horse in that condition. Ideally, I wanted a horse that was already well-trained that I could immediately start showing. I wanted a beautiful dappled gray that everyone would be jealous of, standing tall and proud. But something about the way Reggiville acted with me that day compared to how he acted with other people called out to me and I just had to bring him home. I knew he would be a lot of work, but I couldn’t leave him there to possibly end up in the wrong hands.” 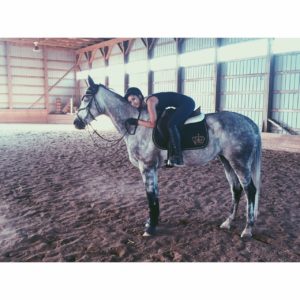 Harris negotiated Reggi’s sales price down from $5,000 to $1.500 and brought him back to Canada. There, she enlisted the help of her friend, Brittany Vandenburg, who just happened to be one of Reggi’s former jockeys.

Harris also had experience with horses. She began riding at the age of four, and would often accompany her mother to the now demolished Windsor Raceway where she would park herself in front of the restaurant’s television and watch the harness races.

“I loved all horses, but I was interested in Thoroughbreds just by their look,” Harris said. “A few barns I was at had Thoroughbreds privately boarded while I was taking lessons and I just always loved the look of them. They’re athletic and fit. I also used to run when I was in grade school and high school. I did cross country and track, so we had that in common. I liked that we loved to run.
“I  never rescued any OTTBs, but I have purchased many as resale projects. They had  their own own quirks and behavior issues, and many needed weight, muscle and proper training. But none of them were like Reggi.”

According to Harris, Reggi had developed a dislike for travel, despite having raced in Illinois, Arkansas and Ohio. He panicked when he got on the trailer, and he cut his face.

“He had severe injuries to his eyelids which needed to be stitched up, and lots of hair needed to grow back,” Harris said. “The vet said we were very lucky because any closer to the eyes and he would have lost both eyes. His eyes were swollen shut for a few days after the stitches, but Reggi has since then made a full recovery.”

And he has since been transformed.

“For about two months, my time with Reggi consisted of healing his wounds, picking up his feet and teaching him he didn’t have to kick me because I wasn’t going to hurt him,” Harris said. “He was very antsy, so I spent hours upon hours with him in the cross ties showing him that it meant he needed to stand still. If I walk with his lead rope, then he can walk; otherwise, he needed to stand still. I went right down to the basics. Things that every racehorse knows Reggi didn’t seem to remember. He wouldn’t let me bathe him without kicking or running in a circle.

“About two weeks into his training he quickly started to realize that manners go a long way, and that I would be firm enough to not let him get away with anything but never would I strike out or abuse him. We needed to form a mutual respect and bond. Slowly, he started letting me lift his back feet with no problem. Now, he falls asleep in the cross tie. His scratches are all healed, and he is shiny and smooth. After I had his ground work where I wanted it, and he was an appropriate weight to be ridden, I then moved into the saddle. Luckily, because of how much time we spent on manners and ground work, Reggi is a superstar in the saddle.” 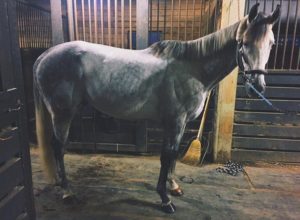 Because of how quickly he has progressed, Reggi has made Harris eager for the coming year.

“I’ve never actually ridden full gallop but it’s in my plans for Reggi and I to let loose on a long strip one day soon,” Harris said. “I would love to show him for 2017, because in 2016 he just wasn’t ready. He has the most amazing movement. You’ll definitely be seeing him in some dressage rings and the jumpers. He’s very versatile and the smartest horse I’ve ever met. He will probably go anywhere I ask him to go.”

His current physical and mental states are the most rewarding parts of their relationship, according to Harris.

“Reggi pretends to like carrots but I don’t think he really does,” she said. “He wants to chew them but usually just spits it all chewed up back into my hand – and then asks for another one. He loves his apples, of course, but I’d say his favorite are peppermints. He loves to sleep on me and be hugged. I’ve always tried to hug my other horses and they would be confused as to what I was doing and step back. Reggi will shove his nose right into the crevice of my neck as if to say, `Hug me harder!’ and he demands that  I kiss his nose. He loves to go for trail rides. He gets excited, but in the best possible way. I’d say his favorite thing is laying in anything that will make him dirty. I think he actually wants to be a bay.

“Getting him was the best decision I ever made. You wouldn’t even be able to tell he’s the same horse. Now, I do in fact have the horse everyone is jealous of.”