TRF Says Goodbye to The Optimist 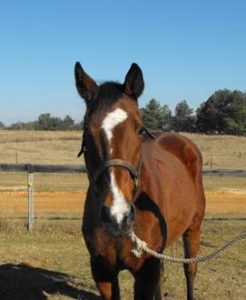 Saratoga Springs, NY – The Thoroughbred Retirement Foundation sadly said goodbye to The Optimist, age 29, (Horatius – More Memories, by Buffalo Lark) last week on the eve of his 22nd anniversary at the TRF.  The Optimist passed away peacefully due the infirmities of old age. His caretaker of 22 years, Andre Wheeler, was at his side when he died at the TRF satellite farm he called home, located in South Carolina.  He spent his last day in his paddock gazing at the mares over the fence.

The Optimist affectionately known as “Big Dee” on the farm, was a hard working campaigner on the racetrack.  He had 76 starts with a record of 14-7-10 and lifetime earnings of $146,770. He was claimed 6 times in his intense five year racing career. The Optimist came to TRF after shattering his ankle; breaking down and not finishing his last race at Penn National.  Despite the adversity he faced in life, he lived up to his name.  With the loving care of Wheeler, he was brought back to health and became a happy horse and was as gentle a soul as any horse could be.  “We are so happy to have been able to provide The Optimist a dignified and compassionate retirement for all these years” says TRF COO, John P. Roche.  The Optimist was fortunate to have a loving, anonymous donor who generously sponsored him for nearly 20 years. He was well loved by everyone in the TRF and will be dearly missed.