by Susan Salk, Off Track Thoroughbreds 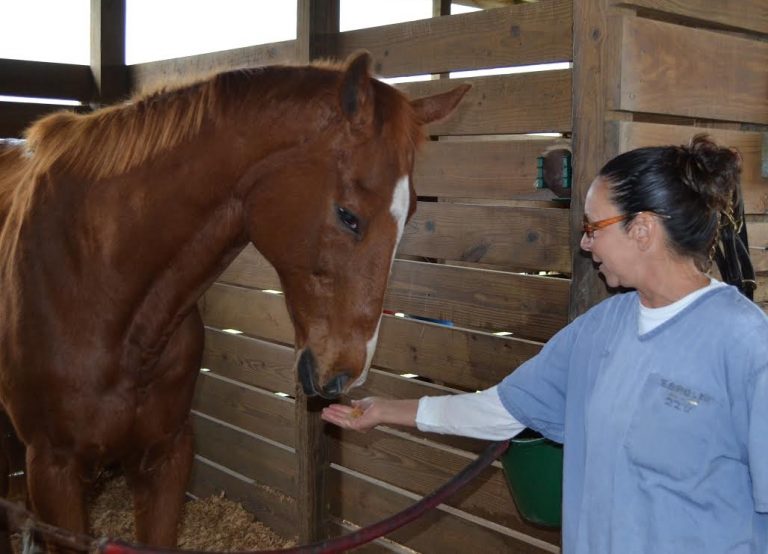 Carterista, 27, and Esposito met at the Thoroughbred Retirement Foundation’s Second Chances program in Florida. The meeting changed the life for the former inmate, who now works for the Florida Horse Park. Photo by Sally Moehring, FTBOA

Ocala, FL – A former inmate who had lost almost everything when she was sentenced to four years in a Florida jail found “some peace” in her life and a path to a new career after embracing the surprise opportunity to participate in a prisoner/racehorse program.

After taking a leap of faith that her prison’s Thoroughbred program could somehow help right her ship that had sailed so off course in life, Kelly Esposito, 51, of Ocala, Fla., graduated the Thoroughbred Retirement Foundation’s Second Chances horsemanship program and landed on solid ground.

In January, after she was released from jail, Esposito began work at the Florida Horse Park in Ocala, performing a property maintenance job that has anchored her to good people, and wonderful horses, she says.

“I have a great support system now,” she says. “I had a job waiting for me at (a local restaurant) when I got out, but I still had some time left in my day. Then I got a call from the Florida Horse Park offering me a position to do stall work to start.”

Starting with three shifts a week, Esposito has taken on increasing responsibilities, including working with tractors and other equipment.

The work is good for her soul, she says, noting that she discovered a love for horses and tractor driving when she enrolled in the Thoroughbred Retirement Foundation’s Second Chances Program in 2013. The program, which teaches life skills to inmates, who in turn care for a herd of retired off-track Thoroughbreds, was like a godsend to her, she says. 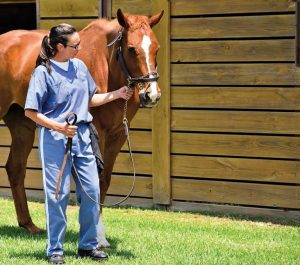 After working together for a year, Esposito’s confidence in her new role with horses grew. Images by DiMarco photo

“The first thing I remember was the van ride over to the farm. When you get in the van, you come up this long, long driveway uphill. And I don’t know why it is, if it’s the moisture in the air over the fields, but there’s always a rainbow,” she says. “The first time I saw that rainbow I started crying. That was the moment I decided I could do this everyday.”

And though the former healthcare worker had no experience with horses—“I was scared to death for the first two weeks because the horses were so huge!”— She was immediately taken under the wing of TRF Farm Manager John Evans.

“Mr. Evans assigned me to Carterista, a gelding who’s turning 27 this year. He required special care, and he was my first,” she says. “He was a great horse at one time. He was a two-time turf champion and got a standing ovation at Calder field.”

She didn’t know racing stats before she started with the program either. But in the company of the impressive ex-racehorses and Evans, Esposito soon knew the racing highlights as well as the healthcare requirements of the whole herd. 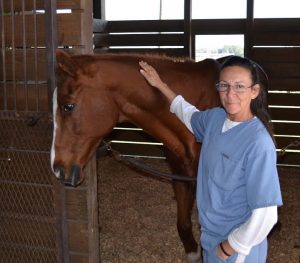 Carterista was the first horse Esposito was assigned to care for. The work changed her life. Photo by Brock Sheradon

Horses, she says, gave her comfort when nothing else could. And over the course of two years working among them, she discovered that life, despite her mistakes that led her to prison, would turn out okay.

Keeping in frequent contact with Evans, Esposito has been welcomed into a support system of former inmates who’ve been through the Second Chances program. They have each other’s back, and keep each other focused on the horses and on moving past their prison terms, she says.

“I just got a car!” she says with delight. “I go to meetings, have great support in my life now. And I think this work is what I’ll be doing for the rest of my life.”