Now in His Third Career, Lucount Is a Star at Last 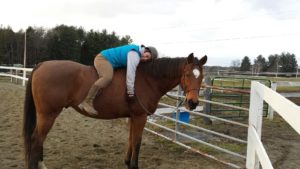 From deep inside, the racehorse began to rise.

His long neck stretched, his front legs reached and his back legs launched.

Lucount was on his way.

Too bad he wasn’t in a race.

“We had taken Louie to a small, local show in Berkshire County (Massachusetts), ” said Janet Renard, laughing as she recalled the story. “My husband knows nothing about horses, so he started cheering. He was yelling, `Look, `Louie’ is passing everybody!’ I just looked at him and said, `That’s not how this works. Louie almost ran over a judge.’

“Lou started out as a racehorse. Then, he was a child’s show horse. Now, he’s in his third career as a therapy horse, but I think he has finally found his true calling.”

It may have taken awhile – Louie’s actual birthday is April 4, when the Florida-bred son of Luciano P-Adelphia’s Account, by Private Account will be 19 – but Louie has turned himself into a star in his new career. He plies his trade at Karry Brothers’ Emerald Glen Equestrian Center in Stephentown, NY, about 20 miles southeast of Troy, NY.

“Unofficially, we call the program `Little Gems at Emerald Glen,’ and we started it in December, 2015,” said Renard, who became a licensed Massachusetts riding instructor in 2010 and a Registered Instructor with the Professional Association of Therapeutic Horsemanship (PATH) International the following year. “We had 10 riders the first year, then 20. Lou is good for everyone from age 7 to 70. Last year, we had a woman who was 70 who never had ridden before, but she learned to ride with Lou.

“Lou has amazing empathy for whoever is on his back. He dials it up and down, according to what we need from him.  We had a girl here with Cerebral Palsy, and riding helps strengthen her legs. Lou is narrow, so he fits her. One time, she lost her stirrup and her balance, but Lou gradually slowed to a gliding stop on his own. He did it calmly and kept the situation calm. As long as someone is on his back, Lou’s attitude is, `I got this.’”

The first person to actually get Lucount was Renard’s daughter, Simone Olivieri. In 2004, Simone and her mother went to an Open House at the Thoroughbred Retirement. There were 26 horses up for adoption, and Renard had pared the field down to a few that she felt were most compatible with her daughter.

According to Renard, the then-14-year-old Simone fell immediately in love with Lucount.  She even staked out his stall, telling potential adopters that he was already taken, even before her mother knew was what going on. As it turned out, Lucount was one of the horses that Renard had on her list 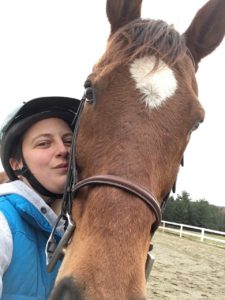 “I don’t know where this love for horses came from,” Simone said. “My mother wasn’t into it at first — I remember when she couldn’t believe what the cost of a riding helmet was – but I took lessons since I was five years old. I worked with Joan Giguerre in Eastover, Mass. She had a lot of Thoroughbreds. I would help feed them, tack them and trail ride with them. Eastover was a resort, and there was a driving range there. There was a fancypants filly that I used to race on the driving range and we had to look out for golf balls. I fell for Thoroughbreds in general. We had gotten one once at auction; this time, Mom had heard about the TRF farm, so we went there to adopt one.

“I was drawn to Louie as soon as I saw him. His eyes were soft and gentle — and curious. I didn’t want anyone else to have him. There was something special about him and I knew he was the one I wanted to bring home. So, I told people they couldn’t have him.”

According to Renard, Lucount was a fairly a sound horse when he joined the family.

“He had been adopted but then brought back to TRF,” Renard said. “He had sound feet, but needed work on a few abscesses; he had a hard time holding a shoe. He was a bit of a head case in the beginning. We called in someone, Elaine Nash, who did Parelli natural horse training. The change was like magic.

“Louie tried hunter/jumper, but he wasn’t great. He would jump verticals, but not solid panels. He had a mental block. “

By this time, Simone had started college at the University of Wisconsin, but illness forced her to come home. She spent a lot of time with Louie, and she began to re-gain her health.  Simone transferred to the University of Massachusetts, where, two years ago, she graduated with a degree in wildlife conservation.

Simone has since returned to Wisconsin, where she works at the Dane County Humane Society, and is also a volunteer at the Henry Vilas Zoo in Madison. Lou’s success with Simone was the catalyst for Renard to try him as a therapy horse for others.

“He was always sweet and affectionate, especially with kids,” said, Simone, who will be back to visit her Mom and Lucount in April. “I got him to where he would give a kiss for carrot, bow while extending his front leg and even pick up towels and rags around the barn.”

According to Renard, Louie loves to work and is happiest when he is being ridden.

“When people talk about therapy horses, Thoroughbred ex-racers don’t always come to mind,” Renard said. “But if people could see Lou at work, they might change their minds. He is the poster horse for the heart and versatility of the Thoroughbred horse.

“We had a therapy girl here who had never been off the lead line. After two or three lessons, we put her on Lou and by last season, she was off the lead and competed independently on flat-show, walk- show and obstacles. Lou knows who is on him and knows what to do. His attitude is, `Don’t worry. I can handle this. I’m not afraid. I was a racehorse. I’m not afraid of anything.’”